On a population level, heart failure (HF) is associated with a 5-year mortality risk of 50%; this equals many types of cancer. However, lower mortality rates have been observed in recent trials. This may be explained by an improvement in medical treatment, patient education, and implantation of devices [1].

Insights into the risk of different HF outcomes stratified according to age is necessary to guide the patients appropriately, as well as to organise public HF care programmes. A Danish study, presented by Dr Christian Madelaire (University of Copenhagen Herlev Hospital, Denmark), examined the long-term mortality risk and risk of inpatient and outpatient worsening HF for patients ≤70 years with incident HF without severe comorbidity, initiating evidence-based medical therapy in a nationwide cohort.

From administrative registers, 19,985 HF patients aged ≤70 years with incident HF from 2000-2012 without severe comorbidity were identified. They had survived the initial 120 days and received angiotensin-converting enzyme inhibitors (ACEi)/angiotensin II receptor blockers (ARB) and beta-blocker therapy. Median age of the patients was 61 years (IQR 54-66), 25% of them were female. These patients were followed until death, emigration, or end of 2015. The 5-year cumulative incidence of all-cause death was 14% (95% CI, 13-14), decreasing throughout the study period. The 5-year cumulative incidence of HF hospitalisation was 18% (95% CI, 18-19) and intensification of diuretic therapy was 14% (95% CI, 14-15). There was an increased risk of death for patients diagnosed in hospital compared with those in outpatient clinics (HR 1.51; 95% CI, 1.38-1.65; P<0.001). Results of the analysis showed that both hospitalisation and intensified diuretic therapy were associated with increased subsequent mortality risk. Increasing age, male sex, and inpatient diagnosis were associated with increased mortality risk, whereas ischaemic heart disease and atrial fibrillation at baseline were not associated with an increased mortality risk (see Figure). 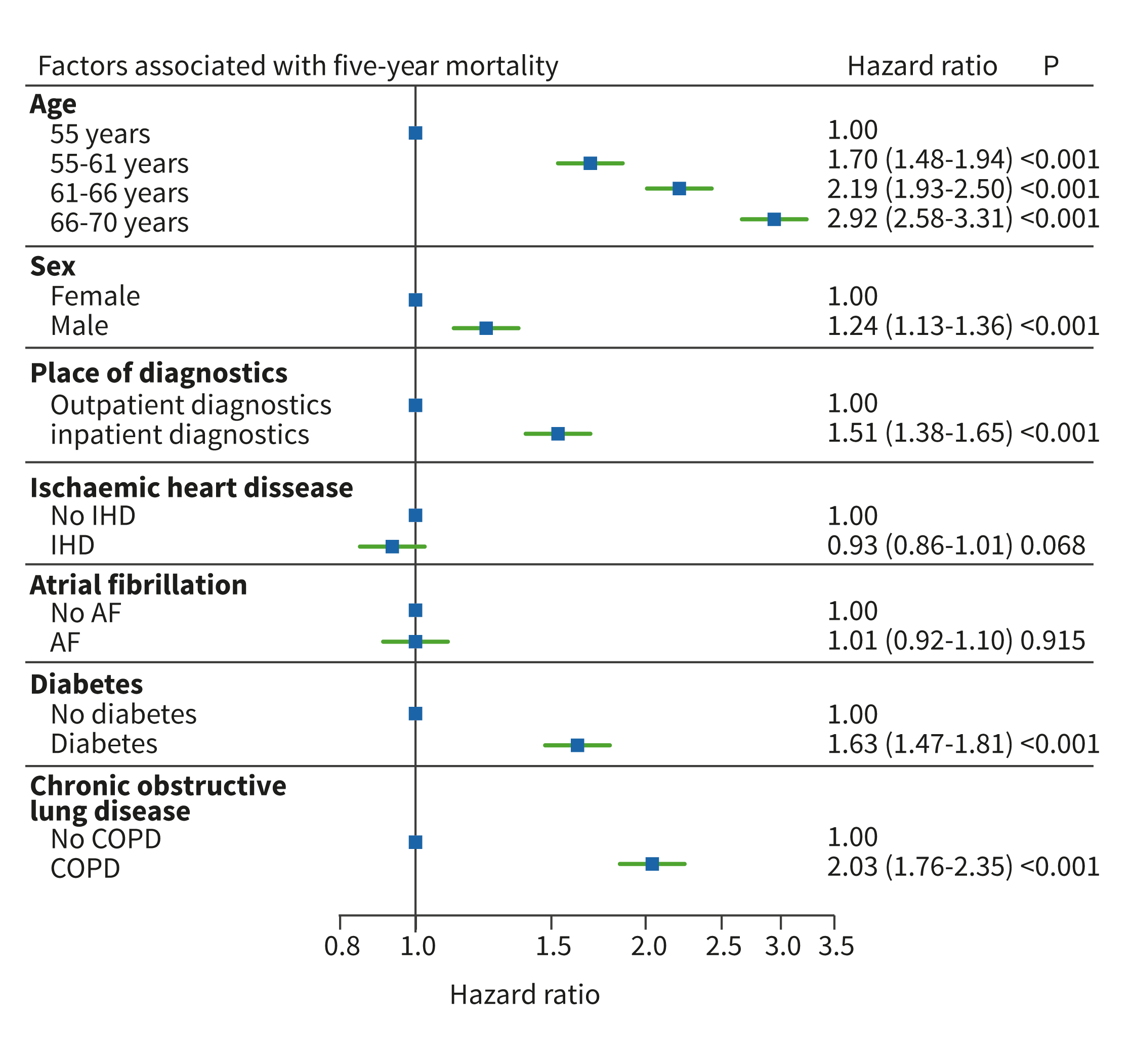 Among patients ≤70 years with HF without initial severe comorbidity who survived initial 120 days and were on ACEi/ARB and beta-blocker therapy at that time, the 5-year survival was 86%. Of those, 78% did not have evidence of worsening HF either by hospitalisation or by major increase in diuretic dose. Overall, 33% of the patients had either died or developed worsening HF by 5 years.