New real-life data on the use of biotin in progressive MS were presented [1]; there was long-term data of ocrelizumab, the first-ever approved treatment of PPMS, in the open-label extension of the ORATORIO phase 3 trial [2]; in addition, results of a post-hoc analysis of the phase 2 trial SPRINT-MS suggested that the effect of ibudilast on progression of brain atrophy is driven by patients with PPMS, more than SPMS [3].

High dose biotin has been suggested to improve mitochondrial energy failure and contribute to myelin synthesis. In 5 French MS centres, 579 progressive MS patients were treated with high dose biotin (203 with PPMS and 376 with SPMS) [1]. The mean EDSS at baseline was 6.4; mean duration of biotin therapy was 12.7 years. EDSS improved in 72 patients (12.4%) and worsened in 110 (18.9%). There was no statistically significant difference between SPMS and PPMS patients. The reported EDSS improvement is remarkably similar to that seen in a previous phase 3 trial, where it was 12.6% [4].

Results from the open-label phase of the 12-months double-blind MS-SPI study at 4 years of follow-up showed that biotin was well-tolerated [5]. There were no new safety signals in the extension phase. Delayed biotin treatment resulted in higher disability over time. Patients improved after switching from placebo to biotin, and the effects of biotin observed in the double-blind phase were sustained over time [6]. After 9 and 12 months, the mean change in EDSS was statistically significant in favour of biotin vs placebo (see Figure). 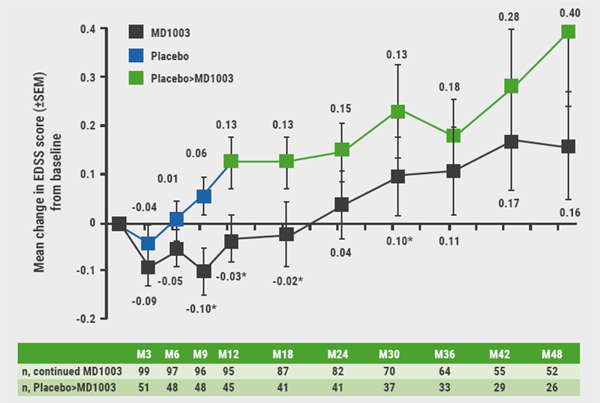 This monoclonal antibody depletes CD20 positive B lymphocytes. The ORATORIO trial investigated the effects of ocrelizumab in primary progressive MS. It showed consistent and sustained benefit of ocrelizumab over 5.5 years in measures of disability progression: Confirmed Disability Progression (CDP), Timed 25-Foot Walk Test (T25FW), 9-Hole Peg Test (9HPT), and a composite measure of CDP (cCDP) [2]. Treatment benefit in the ORATORIO open-label extension was consistent with that seen in the double-blind period and was maintained across different time points, indicating sustained benefit. The proportion of patients with time to onset of 48-week CDP (CDP48) was lower in the continuous ocrelizumab group versus those who switched from placebo to ocrelizumab; at week 168 (30.5% vs 44.4%; P<0.001), at week 192 (34.8% vs 48.5%; P<0.001), and at week 264 (43.7% vs 53.1%; P=0.03). Ocrelizumab had a more profound effect on CDP48 than after 12 and 24 weeks, potentially due to higher specificity for permanent disability accumulation.

The phosphodiesterase inhibitor ibudilast is thought to act by diminishing proinflammatory cytokine production. Because little is known about whether PPMS and SPMS differ in terms of treatment response, a post-hoc analysis of SPRINT-MS was performed [3]. In the original randomised trial, the effect of ibudilast on brain measures of integrity was evaluated in both PPMS (n=134) and SPMS (n=121) [7]. There was a marginally significant 3-way interaction between the treatment effect and disease course (P=0.0576), said Dr Andrew Goodman (University of Rochester School of Medicine and Dentistry, USA), who presented the results. The overall treatment effect was primarily driven by patients with PPMS (P=0.005), not by patients with SPMS (P=0.97). Dr Goodman suggested this difference may at least in part be explained by faster atrophy progression in the untreated PPMS patients (placebo group) than in the untreated SPMS patients (P=0.016). Backwards selection retained age, T2 lesion volume, retinal nerve fibre layer thickness, and longitudinal diffusivity as significant baseline covariates. However, the adjusted difference in treatment effect was still marginally significant (P=0.0715) and driven by PPMS (P=0.007).

Two other subanalyses of the SPRINT-MS trial were presented. One showed that ibudilast slowed annual macular volume loss over 96 weeks compared to placebo [8]. The other made clear that ibudilast treatment was not associated with a decline in either serum or CSF neurofilament light [9]. The authors speculated that inflammatory activity may have confounded the intended use of neurofilament light to measure neurodegeneration.

How to implement brain-healthy behaviour in clinical practice

Long-term efficacy and safety of erenumab

Laquinimod does not improve motor scores in Huntington disease