_The fully human, monoclonal, IL-13 blocker tralokinumab showed to be highly effective in patients with moderate-to-severe atopic dermatitis (AD) [1]. Dysregulation of cell-mediated immune response plays a key role in the pathogenesis of AD. As a result, IL-13 and other type 2 cytokines are overexpressed.

The presented phase 2b trial included 204 adult patients with moderate-to-severe AD. For 12 weeks, 3 randomised groups of study subjects were treated with either 45 mg, 150 mg, or 300 mg of tralokinumab every second week, with a fourth group receiving a placebo. All patients were on a background treatment with topical corticosteroids (WHO class 3). These steroids were applied ≥1 time daily during 2 weeks before receiving tralokinumab, and, if necessary, throughout the rest of the trial. Efficacy was assessed by the percentage of subjects reaching an Investigator’s Global Assessment (IGA) score of 0 or 1, corresponding to clear or almost clear skin with a ≥2-point decrease from baseline and changes in Eczema Area Severity Index (EASI) (co-primary endpoints).

Influence on microbiome and biomarkers

To gain further insight, data was also collected on the intensity of colonisation with Staphylococcus aureus, which can trigger disease flares. Several potential AD-associated biomarkers, such as immunoglobulin E (IgE), periostin, chemokine ligand 17 (CCL17), and dipeptidyl peptidase-4 (DPP-4) were also measured. The application of the highest tested dosage of tralokinumab (300 mg) resulted in a significant reduction of -4.9 in EASI at week 12 (P=0.01). Compared with placebo, nearly 18% more patients reached the IGA response (26.7% vs 11.8%).

Abundance of Staphylococcus colonisation and serum levels of CCL17 both correlated with disease severity (EASI) at baseline. A negative status for S. aureus in lesional skin at week 12 was seen in 66.7% of tralokinumab patients, compared with 27.7 % of patients who received placebo (see Figure). Patients treated with tralokinumab showed decreased levels of periostin (-31.3% vs +1.9%), CCL17 (-40.0% vs +37.4%), and IgE (-22.3% vs +1.6%) compared with placebo, while DDP-4 was slightly increased (+7.3% vs +3.9%). Upper respiratory infections were the most common treatment-emergent adverse events in both groups. They occurred in 3.9% of patients in the pooled tralokinumab dose groups compared with 3.9% of placebo patients. Headaches appeared in both 2% of pooled tralokinumab and placebo groups.

In conclusion, tralokinumab not only induced clinical improvement but also decreased S. aureus and several serum biomarkers. Greatest improvements with tralokinumab therapy were achieved in patients with high DPP-4, low periostin, and a positive status for S. aureus at baseline. 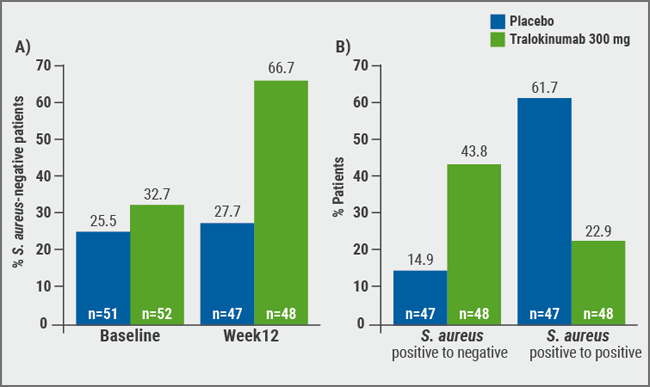