With an increasing number of biologics to treat moderate-to-severe psoriasis, selection of the right drug becomes a real challenge for every dermatologist. Therapy should be guided by comorbidities but also by individual patient preferences. Novel drugs are not only more effective but also safer than conventional immunosuppressive drugs.

At present, there are numerous treatment possibilities for psoriasis. But does one choose the right agent? Selection of therapy has to take comorbidities into account. “The first question, I ask my patients is, do you have joint pain?” said Prof. Mark Lebwohl (Mount Sinai School of Medicine, USA) [1]. All tumour necrosis factor alpha (TNF-α) blockers are also effective in psoriatic arthritis (PsA). Other treatment possibilities are ustekinumab, apremilast, and the IL-17 blockers secukinumab, ixekizumab, and brodalumab.

The correlation between treatment and cancer was assessed in an analysis that included 49 clinical trials, involving up to 13,977 patients on the TNF-α blocker etanercept [2]. When non-melanoma skin cancer (NMSC) and in situ malignancies of the bladder were excluded, there was no elevated risk for malignancies in patients with psoriasis or PsA treated with etanercept. Risk of lymphoma was elevated in patients with rheumatoid arthritis (RA) treated with etanercept; in psoriasis patients there was a 2-fold increased risk, but this failed to meet statistical significance. The only markedly elevated risk was found with regard to squamous cell carcinoma: Psoriasis patients with low sun exposure had a 2-fold elevated risk whereas those with high sun exposure had nearly a 5 times elevated risk [2]. In a trial including patients with RA, TNF-α blockers caused 1 additional malignancy in 6-12 months [3]. “However, this is a different population from dermatology and the studies have methodical flaws,” said Prof. Lebwohl. Nonetheless, there seems to be an increase in NMSC, melanoma, and lymphoma but not in most solid tumours. Lung cancer is only elevated in patients with chronic obstructive pulmonary disease.

IL-17 and IL-23 blockers do not elevate cancer risk

The risk of cancer seen with TNF-α blockers cannot be extrapolated to other biologics. On the contrary, blocking IL-17 could even be protective as IL-17-mediated inflammation promotes tumour growth and progression in the skin, which has been demonstrated in a well-established inflammation-associated tumour mouse model [4]. Up to now, therapy with IL-17 blockers has not been associated with an increase of malignancies. The same holds true for IL-23 blockers such as guselkumab or tildrakizumab.

The positive data on newer biologics is in stark contrast to the cancer risk of conventional immunosuppressive drugs. Incidence of NMSC increases in organ transplant patients with duration of immunosuppression therapy [5,6]. A 5-year cohort study assessing the risk of malignancies in 1,252 psoriasis patients treated with cyclosporin showed a 6-fold elevated risk for skin cancer, but no risk elevation for non-skin cancer [7]. In RA patients, therapy with methotrexate was associated with a 50% increased malignancy risk and a 3-fold increased risk of both melanoma and lung cancer [8]. On the other hand, acitretin and retinoids seems to be protective [9]. "If I have a patient with a history of squamous cell carcinoma, I give acitretin. But, unfortunately, this agent has only a modest anti-psoriatic activity," said Prof. Lebwohl. Table 1 shows the influence of different anti-psoriatic drugs on common comorbidities.

_Table 1: Selection of biologics according to comorbidities [1] 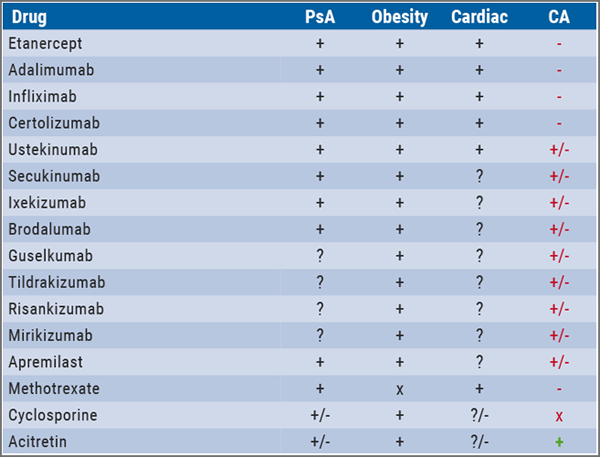 Therapy should not only be guided by comorbidities, but also by patient´s preferences. "Patients who cannot easily self-inject every 1-2 weeks need either a pill or medication that requires infrequent injections," recommended Prof. Lebwohl in his lecture on “psoriasis pearls”[10]. IL-23 antibodies like guselkumab, tildrakizumab, or risankizumab have to be administered every 8 to 12 weeks only. Despite these long intervals, over 80% of patients in the VOYAGE 1 trial achieved a PASI90 response through week 156 with guselkumab.

Since October 2017, teens (>12 years) with moderate-to-severe psoriasis can be treated with the IL-12/23 blocker ustekinumab. This approval was based on a phase 3 study that showed that in at least two thirds of patients aged 12 to 17 who were treated with ustekinumab had clear skin or minimal disease at week 12 [11]. The safety profile was similar to that seen in studies of adults with plaque psoriasis.

Up to now, there have been more than 100 cases of mostly unintentional overdoses of secukinumab. Fortunately, there are no reports of unusual adverse events. "In most cases we do not see any adverse events," said Prof. Lebwohl. In the event of an overdose, it is recommended that the patient be monitored for any signs or symptoms of adverse reactions and appropriate symptomatic treatment can be instituted immediately. Two cases of intentional overdoses have been published [12]. Both patients were treated with 450 mg secukinumab (instead of 300 mg) to gain a complete response, and the dose was well tolerated.

IL‐17A also plays an important role in immunological protection against infections, especially against fungal infection. According to published clinical trials of IL-17 inhibitors, Candida infections were reported in 4.0% of patients treated with brodalumab, 2.1% with secukinumab, and 3.3% with ixekizumab vs 0.3%, 2.3%, and 0.8% of those who received placebo or active comparators [13]. According to Prof. Lebwohl, patients treated with these agents should be monitored for Candida infections. Most of them are mild to moderate in severity. His "pearl" for management is oral fluconazole in a single dose of 150 mg.

IL-17 and IL-23 blockers: no risk of tuberculosis reactivation

Another "psoriasis pearl" that Prof. Lebwohl shared with his audience is that there is no risk of tuberculosis (TB) reactivation when treating psoriasis patients with IL-17 or IL-23 blockers. This was shown in an analysis of 25 patients with a past history of either pulmonary TB, latent tuberculosis infection (LTBI), or a positive TB test [14]. Despite their TB status, they were treated with secukinumab for 363 days due to a negative test result at screening. None of the patients received TB treatment during the trial, and there was no TB reactivation during or after the trial. One patient who was negative at baseline was diagnosed with LTBI following retest according to local guidelines (Argentina) on day 141 while on therapy with secukinumab. He was treated with isoniazid 300 mg daily and completed the study without dose interruption of secukinumab.

Ixekizumab, another IL-17 blocker, also has been shown to be safe in patients with TB as no TB reactivations were found in 11 clinical trials [15]. As Prof. Lebwohl pointed out, there is also reassuring data with regard to the IL-23 blocker guselkumab. In the VOYAGE trials, 130 patients tested positive for LTBI at baseline and were randomised to placebo, guselkumab, or adalimumab. All of them received concomitant anti-TB treatments and there was no TB reactivation during the trial.

In contrast to the cytokine blockers, all TNF-α inhibitors are associated with an increased risk of reactivation of TB in patients with LTBI, because TNF-α is a key cytokine that protects host-defence against Mycobacterium tuberculosis. TB is frequently extrapulmonary in patients on TNF-α inhibitors. Therefore, testing patients for TB is mandatory before initiating treatment. TB reactivation has also been seen after therapy with conventional immunosuppressants such as methotrexate, even in low doses.