Consensus statements include that antibiotics for acne should be combined with topical therapies (i.e. benzoyl peroxide or retinoid), and tetracyclines are recommended as first-line drug. Treatments and therapy duration should be limited with regard to the induction of resistance. Other agents like erythromycin and azithromycin should be restricted to cases were tetracyclines cannot be used [3]. Tetracyclines represent 75% of antibiotics prescribed in dermatology. Low-dose doxycycline treatment (40 mg) has been shown to be superior to placebo as well as high-dose therapy (100 mg).

In comparison with minocycline, doxycycline entails more gastrointestinal problems especially in its hyclate formulation. Furthermore, it has a higher potential to induce photosensitivity and vaginal candidiasis. Doxycycline should be taken with a large glass of water and food to reduce side effects. Other methods to improve tolerability are staying upright for a few hours after intake, correct application of sunblock, and adding probiotics to the diet. Advantages of minocycline are related to the multiple anti-inflammatory effects, higher reduction in P. acnes, and a higher follicular concentration due to its lipophilia. Minocycline can induce epidermal pigmentation such as blue-black colouring near scars or blue-grey hyperpigmentation of normal skin on arms and legs. In multiple trials, these phenomena appeared only after ≥8 months of treatment and a cumulative dose of ≥70 g of minocycline.

Sarecycline − a new kid on the block

The novel narrow-spectrum tetracycline-class antibiotic sarecycline has been FDA-approved for moderate-to-severe acne in patients ≥9 years of age in October 2018. Sarecycline is taken once daily in a weight-based dosage independent of food intake. It is not only anti-inflammatory but also blocks protein biosynthesis. Two identically designed pivotal phase 3 trials included approximately 2,000 patients aged 9-45 years with moderate-to-severe facial acne defined as an IGA ≥3, 20-50 inflammatory lesions, ≤100 noninflammatory lesions, and ≤2 nodules [4]. Sarecycline 1.5 mg/kg/day was investigated against placebo over 12 weeks.

Results of the pooled intention-to-treat population showed significant superiority of sarecycline starting at week 3 and a mean change in percent of inflammatory lesions of 34.7% and -50.4% for placebo and sarecycline, respectively (see Figure). In addition, non-inflammatory lesions were notably reduced. The most common adverse event was nausea, occurring in 3.2% of sarecycline and 1.7% of placebo patients. Phototoxic effects and vaginal yeast infections in females occurred in less than 1% of patients. In general, antibiotic treatment should be limited to 3 to 4 months. The decision of when to end systemic antibiotics is particularly influenced by disease severity, resistance potential, and response. The latter should be evaluated after the first 6-8 weeks.

Figure: Sarecycline leads to a significant reduction of inflammatory lesions [4] 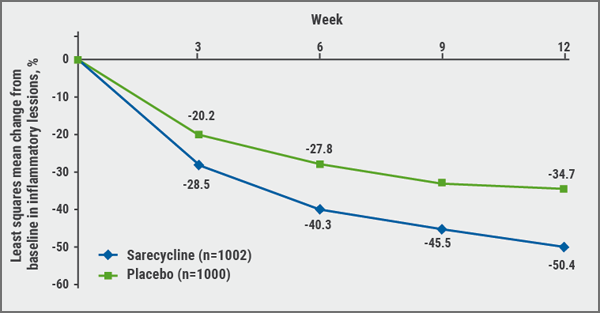 New data on isotretinoin use

A Cochrane review published in 2018 assessed the efficacy of oral isotretinoin for acne in 31 published studies [5]. “However, all included studies had a limited design,” said Prof. Diane Thiboutot (Penn State Clinical and Translational Science Institute, USA) in her lecture on isotretinoin considerations [6]. Therefore, the authors are unsure if isotretinoin improves acne severity compared with standard oral antibiotic and topical treatments when assessing the change in total inflammatory lesion count, but it may slightly improve physician-assessed acne severity [6].

Another study published last year showed that isotretinoin changes the microbiome in acne [7]. During treatment, “healthy” bacteria such as ribotype 3 showed an upward trend compared with ribotype 6 bacteria that are associated with acne. Propionibacterium species globally decreased during treatment. However, 38% of patients had still high Propionibacterium and a low proportion of ribotype 3 after treatment. “This result shows that assessment of microbiome could possibly serve to identify the 10-20% of patients who need isotretinoin retreatment,” concluded Prof. Thiboutot.