The IL-23 blocker risankizumab was superior to both placebo and ustekinumab over 52 weeks in two identical, double-blind, placebo- and ustekinumab controlled Phase 3 trials (ultiMMa-1 and ultiMMa-2) [5].

Both trials compared the IL-23 inhibitor risankizumab with placebo and ustekinumab over 52 weeks in a total of 797 patients with moderate-to-severe plaque psoriasis. Patients in the placebo arm were switched over to risankizumab after 16 weeks. The primary targets were a reduction of the Psoriasis Area and Severity Index (PASI) by 90% (PASI 90) and clear or almost clear skin, according to the static Physician´s Global Assessment (sPGA 0/1). In addition, 15 secondary targets were assessed at different time points during the 52-week study.

Risankizumab met all: the difference in efficacy between the drugs were all statistically significant at 16 and 52 weeks (P<0.001). At 52 weeks, when the placebo group had crossed over to risankizumab, the percentage of patients whose symptoms were completely cleared increased in both groups but risankizumab was still more effective than ustekinumab.

“We saw 75% of patients achieving PASI 90 vs. 5% on placebo, and 88% sPGA clear or almost clear compared to 8%,” said lead author Prof. Kenneth Gordon of the Medical College of Wisconsin. The PASI 100 response was among the highest ever reported—60% at Week 52 in the risankizumab group vs. 30% for ustekinumab. “This is where we see the real difference between these new biologics and drugs we used to use”, said Prof. Gordon.

As expected, quality of life (QoL) improved with higher clearance rates: more than 70% of the patients treated with risankizumab reached a 0/1 response in the Dermatology Life Quality Index (DLQI), which means that their disease no longer has an impact on their QoL. About 15% of patients experienced adverse events related to the drugs, but they were similar for risankizumab and ustekinumab with no unexpected safety signals. The most frequently reported risankizumab-emergent adverse event was upper respiratory tract infection.

Analysis of the VOYAGE-2-trial: a first glimpse into disease modification?

An analysis on the long-term efficacy of guselkumab after drug withdrawal and retreatment in patients with moderate-to-severe psoriasis showed that this agent had an amazing durability of response [6].

This analysis included patients who were originally randomised to guselkumab in the Phase 3 VOYAGE-2-trial and achieved a PASI 90 response at Week 28. Patients were then either re-randomised to placebo/withdrawal (with retreatment upon loss of ≥50% PASI improvement achieved at Week 28 or at Week 72 if retreatment criteria were not met) or continued guselkumab treatment (every eight weeks) through to Week 72.

Of patients who remained on treatment during the 76-week study, 86% showed PASI 90 or better. When they were taken off the drug, only 37% of patients displayed PASI 90 20 weeks later and 12% displayed it at the end of the study, 44 weeks later.

“We know that if you withdraw from the drug, you open the door to the return of disease,” said lead author Prof Kristian Reich of the Sciderm Research Institute. “However, the median time to loss of PASI 90 response was 15 weeks—23 weeks after the last guselkumab dose—for patients randomised to the withdrawal group; with adalimumab, this happens much earlier.”

According to him, this is an amazingly durable response. Patients who were randomly withdrawn from guselkumab and re-treated had a response similar to continuous treatment, with 88% achieving PASI 90 six months after retreatment. This was also reflected in high DLQI 0/1 scores after patients were re-treated with Guselkumab.

“When patients are treated with guselkumab we see a dramatic fall of IL-17A, but now comes the interesting part—even in patients that are off the drug but maintain their PASI 90 response, there is no reoccurrence of IL-17A, IL-17F, and IL-22 in contrast to patients that lost PASI 75 response [Figure 2]: in these patients, IL-17 goes up quickly. This might be our first glimpse into disease modification,” concluded Prof. Reich. 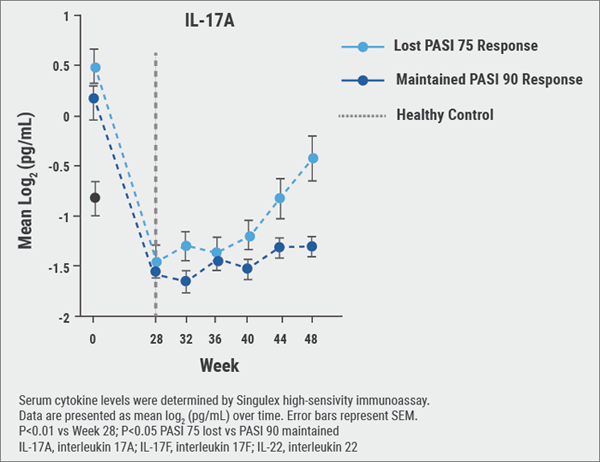 Figure 2: Maintenance of PASI 90 Response after drug withdrawal is associated with continued suppression of IL-17A, IL-17F and IL-22 [6]

According to the 12-weeks results of a Phase 2 trial, the dual IL-17 inhibitor bimekizumab is an interesting novel treatment option for patients with moderate-to-severe psoriasis [7].

Bimekizumab is a humanised monoclonal lgG1 antibody that selectively neutralises IL-17F in addition to IL-17A. The rationale for developing this drug was that simultaneous targeting of both IL-17 subgroups might increase efficacy. IL 17A and 17F are key cytokines that jointly express in the inflammation contributing to tissue impairment [Figure 3].

Lead author Dr Kim Papp of Probity Medical Research found that, at 12 weeks of treatment with the highest bimekizumab dose, up to 86% of patients achieved a PASI90 response (primary target), and 60% achieved a PASI 100 response: a complete clearance of their psoriatic lesion.

Treatment with bimekizumab also provided an improvement in psoriasis severity, as measured by an Investigator's Global Assessment (IGA) 0/1 ("clear" or "almost clear") response. “Looking at the curves, I think we have not yet reached the maximum response,” said Dr Papp. The most frequently reported treatment-emergent adverse events were nasopharyngitis and upper respiratory tract infections.

Figure 3: Both IL-17A and IL-17F contribute to tissue inflammation in psoriasis. [7]

Patients with moderate-to-severe psoriasis have a significantly elevated cardiovascular risk [8]. This is particularly true in patients with a body surface area (BSA) of >10%: they have an 80% increased risk of mortality, independent of major risk factors [9].

There is preliminary evidence that some psoriasis treatments improve cardiovascular biomarkers and the incidence of cardiovascular risk [8]. Systemic inflammation is regarded as the link between psoriasis, obesity, and other cardiovascular diseases.

A trial presented by Prof. Joel Gelfand of the University of Pennsylvania Perelman School of Medicine tried to determine whether therapy with the IL-12/23 blocker ustekinumab can reduce aortic inflammation and whether this will translate into lower cardiovascular risk [10].

Previous studies have demonstrated that as the PASI score goes up, so does the aortic inflammation. Patients with severe psoriasis therefore develop a high risk of atherosclerotic plaques. At the meeting, the 12-week data of the “Vascular Inflammation in Psoriasis (VIP-U)” trial were presented. 43 randomised patients received placebo or two injections of ustekinumab. At Week 12, a PET/CT was performed, after which all patients were treated open-label with ustekinumab for up to one year.

The efficacy of ustekinumab was as expected: 77.3% of patients gained a PASI 75 response (compared to 10.5% with placebo; P<0.001) after 12 weeks, and 63.6% gained clear or almost clear skin in the PGA, reported Prof Gelfand. However, the significant reduction of vascular inflammation, measured by fluorodeoxyglucose positron emission tomography (FDG-PET), came as a surprise: effect sizes were in a similar range as those seen with statin therapy. In just 12 weeks, therapy with ustekinumab was followed by a 6.6% reduction in total aortic inflammation, whereas a 12.1% increase in inflammation occurred in the placebo group.

The results were independently confirmed by a separate imaging laboratory. Whether the reduction of vascular inflammation will also lead to a reduced cardiovascular risk is a matter of debate. The study will go to open label at one year and biomarker assays will be presented in future meetings.

According to Prof. Gelfand, this might be a class effect of the IL-12/23 blocker, because an earlier trial with the TNF blocker adalimumab failed to display an effect on aortic inflammation [11]. To resolve this issue, longer-term effects for ustekinumab as well as the biomarker analyses have to be awaited. As Prof. Gelfand indicated, additional trials are necessary to determine whether this effect is due to inhibition of IL-12, IL-23 or a combination of them. Only a cardiovascular event trial will be able to fully determine the clinical implications of the effect on vascular inflammation.