In the pathogenesis of AD, an immune dysfunction with an enhanced Th2 inflammation is as important as the epidermal barrier dysfunction.

Dupilumab, a potent blocker of IL4 and IL13, is the first biologic approved for the treatment of AD. Both cytokines are key mediators of TH2 inflammation, but also lower epidermal barrier proteins [16,17]. Dupilumab impacts both the inflammation and the barrier dysfunction in AD, thus targeting two key factors in AD pathogenesis.

As Prof. Eric Simpson, of Oregon Health & Science University, pointed out, about 50% of patients in the SOLO trial treated with a monotherapy of dupilumab gained an improvement in the EASI by 75% [18]. The efficacy is even higher when combined with topical steroids: 69% of patients gained an EASI 75 response, as was shown in the CHRONOS trial [19]. The one-year data of the CHRONOS trial have shown that the effect persists over a year. In addition, dupilumab is effective in itch reduction. All improvements are well beyond a minimal clinically important difference.

Even non-responders benefit from the treatment

A post hoc analysis of the SOLO trial presented during the AAD meeting indicated that even patients on dupilumab that could not achieve clear or almost clear skin according to Investigator´s Global Assessment (IGA) still had a clinically relevant treatment benefit from the biologic [20].

In the SOLO1 and SOLO 2 trials, 36–38% of adults with moderate-to-severe AD treated with dupilumab 300 mg every two weeks (and 8–10% of patients who received placebo) achieved an IGA score of 0 or 1 and a ≥2-point reduction in IGA score from baseline. This endpoint represents an exceptionally good clinical outcome, particularly in a population of patients with moderate-to-severe AD not adequately controlled with topical treatments.

However, this endpoint may be missing important, clinically-meaningful treatment benefits. Therefore, patients who did not reach this endpoint at Week 16 were analysed with other disease severity measures: the percent change from baseline in EASI, the proportion of patients achieving a ≥ 50% improvement in EASI from baseline, and the percent change from baseline in peak pruritus numerical rating scale (NRS) and compared to placebo. The IGA scale has important limitations compared to the EASI: It does not capture changes in BSA affected by AD lesions and is typically limited to signs of acute skin inflammation (erythema and induration/papulation). At Week 16, dupilumab induced a greater improvement from baseline against placebo in the EASI score (-57.8% vs. -28.8%; P<0.0001) in patients not achieving IGA 0 or 1. In addition, a greater proportion of patients receiving dupilumab vs. placebo achieved EASI-50 (68.7 % vs. 32.4%; P<0.0001)

Dupilumab also induced a greater improvement from baseline compared with placebo in peak pruritus NRS score (−41.9% vs. −21.3%; P<0.0001; Figure 9) The positive results of therapy with dupilumab in IGA non-responders is also mirrored in the patients’ global assessment of the treatment: a greater proportion of patients receiving dupilumab compared to placebo rated the treatment as being “good”, “very good”, or “excellent”.

“Overall, the IGA scale underestimated the efficacy of dupilumab in these patients,” concluded Prof. Simpson. While IGA 0 or 1 can be a valid clinical outcome as a disease state consistent with clinical remission, the upper portion of the scale (IGA 2-4) lacks the sensitivity to discern important and significant differences between study groups.

“The only frequent side effect of therapy with dupilumab is conjunctivitis, but most of the time it resolves without intervention and it is mild or moderate”, said Prof. Simpson. In the future, JAK inhibitors will play an increasingly important role also in AD treatment. “But JAK-inhibitors block many interleukins; we are still not sure about their safety. These agents definitely need close monitoring,” said Prof. Simpson. Many agents are currently in Phase 2 trials. 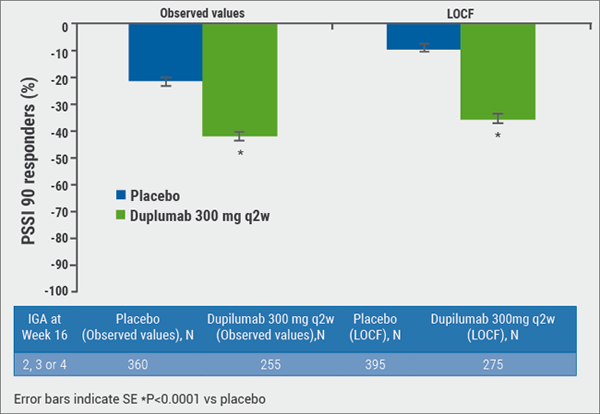 Figure 9: Dupilumab significantly improves itch in a NRS score at Week 16 in patients not achieving IGA 0 or 1. [19]