Spoiled for choice regarding biologics in psoriasis

Biologics have revolutionised the management of moderate-to-severe psoriasis and allow clear or almost-clear skin in many patients. All biologics yield superior PASI 75 responses (ranging from 40% to >90%) when compared with methotrexate, cyclosporine, and acitretin, with better overall tolerability.

“From the IL-17 inhibitors, we have data over a treatment period of more than five years: they show that the efficacy stays the same over this period of time,” said Dr Jashin Joaquin Wu of Kaiser Permanente Los Angeles Medical Center, in his update on biologics in psoriasis [10].

In the GESTURE study, more than half of all patients treated with secukinumab achieved clear or almost-clear palms and soles by Week 132. The mean percentage change in the palmoplantar PASI (ppPASI) score from baseline to 2.5 years reached -74.7% and -61.6% for secukinumab 300 mg and 150 mg, respectively.

The IL-17 blocker showed comparable efficacy in the treatment of nail psoriasis in the TRANSFIGURE study: both doses of secukinumab demonstrated a large sustained improvement in mean Nail Psoriasis Severity Index (NAPSI) scores from baseline to Week 16 and Week 132. After 2.5 years, NAPSI scores decreased by 63.6% with 150 mg secukinumab and by 73.3% with 300 mg secukinumab [12].

In the SCALP study, almost 60% of patients treated with secukinumab had clear or almost clear scalps as early as Week 24 [Figure 7] [12]. 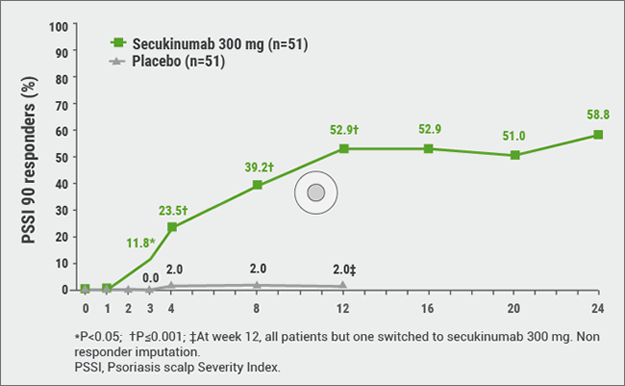 “However, you should not use IL-17 inhibitors in patients with pre-existing inflammatory bowel disease,” Prof. Wu recommended.

Secukinumab is also clearly superior in comparison to the IL-12/IL-23 blocker ustekinumab, as the recently published one-year data from the CLEAR trial have shown [13]. Curves separated as early as Week 8 until Week 52.

Along with ixekizumab, the second IL-17 blocker was approved in September 2017 for adults with active psoriatic arthritis. The agent may be administered alone or in combination with a conventional Disease Modifying Antirheumatic Drug (DMARD); for example, MTX. Brodalumab is another biologic that interacts with IL-17 in a slightly different way, binding not to the cytokine IL-17A itself but to the IL-17A receptor.

Brodalumab also proved to be significantly superior to ustekinumab in the AMAGINE-2 and AMAGINE-3 trials [14]. However, it has a boxed warning about suicidal ideation and behaviour: four suicides occurred in subjects treated in the psoriasis clinical trials but not in the 12-week placebo-controlled period.

There are also some interesting new agents in the pipeline: an example is the selective IL-23 blocker guselkumab. In the VOYAGE 1 trial, 96.8% of patients reached a PASI 75 response, 83.8% a PASI 90 response and 50% a PASI 100 response, meaning completely clear skin [15].

Certolizumab is not a new drug — it is approved for rheumatoid arthritis — but it is new in psoriasis and psoriatic arthritis: it showed remarkable efficacy in a Phase 3 psoriasis trial (CIMPASI-2) [16]. “This drug is important, because certolizumab is no problem in pregnancy as there is no placental transfer, which is important for female patients of child-bearing age,” explained Dr Wu. This has been demonstrated in the CRIB trial that was designed to measure the potential level of placental transfer of certolizumab from pregnant women to their infants [17]. A total of 16 women (≥ 30-week gestation) who were already receiving the agent for approved indications (rheumatoid arthritis, Crohn´s disease, psoriasis artritis and axial spondylarthritis) were followed in the study. Blood samples were collected from each woman, the umbilical cords, and their infants at delivery, and again from infants at Weeks 4 and 8 post-delivery. Certolizmab blood concentration was measured with a sensitive, speciﬁc electrochemiluminescence immunoassay with an extremely low level of quantiﬁcation of 0.032 µg/mL. Certolizumab levels were below this level in 13 out of 14 infant blood samples at birth, and in all samples at Weeks 4 and 8 post-delivery. One infant had a minimal certolizumab level of 0.042 µg/mL.

Another interesting agent in the pipeline is tildrakizumab, an agent that targets interleukin23p19. It proved to be active in the reSURFACE 1 and 2 trials [18].

“The safety of this biologic looked pretty good, so this will be a valuable additional treatment option,” said Dr Wu.

As he pointed out, we are “spoilt by choice” with eight biologics and four oral medications. “Adalimumab and ustekinumab are my first-line biologics,” he said. “If monotherapy or combo with MTX is not successful, then I switch to secukinumab, ixekizumab, brodalumab, or guselkumab.” But it´s all about individualisation of therapy: in patients where there is concern about adverse events, acitretin, UVB or apremilast are good choices. Severe flares are most effectively managed by cyclosporine (5 mg/kg/day).

In patients where quicker clearance of psoriasis is needed or patients with concomitant psoriatic arthritis or palmoplantar psoriasis, Dr Wu advocates IL-17 inhibitors: “Otherwise, I rather give IL-23 inhibitors based on dosing and fewer adverse events, as I do not have to worry about candida infections and inflammatory bowel syndrome”, he said.